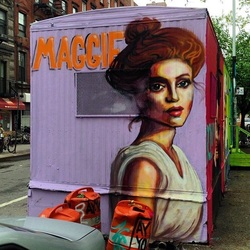 Maggie was born to Irish immigrants and abandoned at a young age of 6 or 7 in the gang-infested Five Points district of the Lower East Side of New York.

At the tender age of 8, Maggie was befriended by "Gentleman Jasper", an expert sneak thief, who brought her into the fold of the Whyos. He came across her, late one afternoon, in one of the alleyways, fighting two older boys. Jasper was the head of one of the biggest street gangs at the time, The Whyos (so called because the gang’s cry sounded like a bird call). She joined Jasper on his sneak thievery and was a quick and willing learner, becoming adept at both robbing banks and fighting anyone who looked at her wrongly, and some who didn't.

Maggie is said to have prepared for battle by filing her front teeth to points and who wore long sharp artificial nails made of brass. The sight of Hell Cat Maggie clawing, biting and screaming was, apparently, enough to make even the most hardened gang member weep. And, at that time, gang fighting was not just a pleasant way to pass a boring afternoon. Any fallers were set upon and beaten to death.

But it wasn’t just about fun. Politics was involved too, and the two major political parties of the time (the democratic Tammany Hall party and the republican anti-immigrant, anti-catholic Native Americans (known as the Know-Nothing Party)) used the gangs to gain control, shut down their rivals, and to steal public funds. Corruption was rife and everything had a price, and everyone’s hand was out. In one area of New York a contractor charged just under $2.9million for a plastering job which should have cost $20,000.

Hell Cat Maggie was a ‘shoulder-hitter’ – someone who was employed by one political party or another to use the threat of violence, or, indeed, actual violence (Maggie’s much preferred option, it has to be said) to ‘persuade’ voters to vote for their candidate. With her sharp teeth and pointed nails Maggie quite literally ripped the Republicans to shreds on election day.

In Martin Scorsese’s film, Gangs of New York, a composite character partially based on Maggie was played by Cara Seymour. Maggie’s fate is unknown, but it’s unlikely that she settled down to a life of domestic bliss.