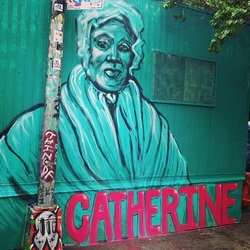 Educator, Social Worker & Philanthropist
​
Born into slavery, Catherine ("Katy") Ferguson was eight years old when her mother was sold. That permanent separation affected her greatly, and lost and needy children became the mission of her life. She is known for creating the first Sunday School in New York City.

When she was sixteen years old, a friend purchased Catherine's freedom for $200. Catherine married at eighteen and had two children but both died in infancy.

Although illiterate, Catherine gathered the poor and neglected children of the neighborhood, white and black, for religious instruction every Sunday at her home on Warren Street. A minister who heard of her work convinced her to move her school to the basement of his new church on Murray Street. Thus, Catherine Ferguson's Sunday school was the first to be established in the city of New York.

But her benevolent labors did not end with her Sunday school duties. Twice a week she held prayer meetings for the children and adults in her neighborhood. She continued that work for over 40 years in every neighborhood in which she lived.  In an obituary, antislavery activist Lewis Tappan wrote of Catherine, "The love of God was shed abroad in her heart, and it found expression in acts of benevolence to his children."

Over the course of her life raised and educated a total of 48 children from the streets or from parents who were unable to care for them.