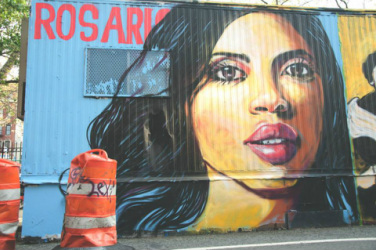 Dawson was born in the Lower East Side of New York City, New York. Her mother, Isabel Celeste, is a writer and singer who is of Puerto Rican and Afro-Cuban descent.

At the age of 15, she was subsequently discovered on her front porch step by photographer Larry Clark and Harmony Korine, where Korine lauded her as being perfect for a part he had written in his screenplay that would become the controversial 1995 film Kids.

She went on to star in over 15 films including Sin City, Rent, and Men in Black 2
Dawson is also passionate and involved with the Lower East Side Girls Club and supports other charities such as environmental group Global Cool, the ONE Campaign, Oxfam, Amnesty International, Parents, Families and Friends of Lesbians and Gays, Stay Close.org  (a poster and public service ad campaign for PFLAG where she is featured with her uncle, Frank Jump), International Rescue Committee, and Voto Latino, and she participated in the Vagina Monologues. She is on the V-Day Board. She attended the 2008 Democratic National Convention as well as the 2008 Republican National Convention. In October 2008, Dawson became a spokeswoman for TripAdvisor.com’s philanthropy program, More Than Footprints, involving Conservation International, Doctors Without Borders, National Geographic Society, The Nature Conservancy, and Save The Children.